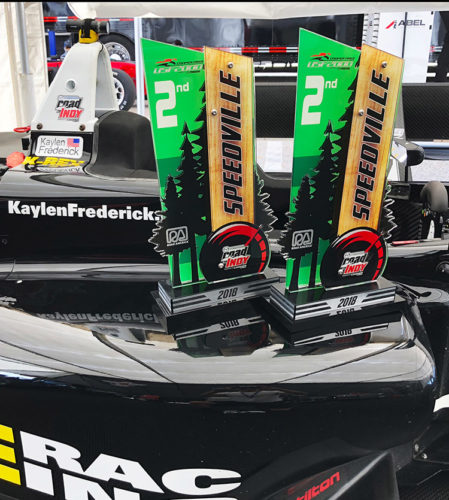 During the week preceding the USF2K races at Road America, Kaylen Frederick and Pabst Racing had solid pace and topped the charts at the Official MRTI Test:

‘Kaylen Frederick, who finished fourth in the USF2000 championship in his rookie year, put Pabst Racing on top of the USF2000 times with a 2:09.3357, narrowly edging another series sophomore and teammate Lucas Kohl.’

Swedish rookie Rasmus Lindh (Pabst Racing) led the field to the green this afternoon, only for Kirkwood, who started second, to draft past into the lead before Turn One. Frederick, who started fourth, braked deep in Turn One and dropped behind Lindh into third place, sneaking ahead of yet another Pabst Racing Tatuus USF-17 driven by third-place qualifier Calvin Ming, from Georgetown, Guyana.

A pair of Brazilians, Igor Fraga (Exclusive Autosport) and Lucas Kohl (Pabst Racing), also were in the thick of the action until Turn 13, where incidental contact ended with Kohl spinning to the back of the pack. Fraga continued in fifth, right behind Donegan, who somehow negotiated his way from 10th on the grid to fourth by the completion of the opening lap.

Kirkwood seemed to have the measure of Lindh as he pulled out to a lead of 1.4 seconds inside the first three laps, only for his advantage to be negated by a full-course caution after Sabre Cook slid into the gravel at Turn 10.

There was more drama at the restart, when the slow pace caught out several drivers in the midfield. South African Julian Van der Watt (Team Pelfrey) was among the victims as he inadvertently contacted another car, causing severe nose-wing damage which resulted in a pit stop for repairs.

Kirkwood maintained his lead over Lindh, Frederick and Donegan, with Kory Enders (DEForce Racing), from Sugarland, Texas, holding off a snarling pack of hungry youngsters in fifth.

Frederick’s pressure on his teammate paid off on Lap Eight when he took advantage of the draft to move into second. Later during the same lap, at Canada Corner, Donegan also managed to fight his way past the young Swede, who ran wide on the exit and immediately lost out to Enders, too.

Lindh battled his way back into fourth a couple of laps later, but any hopes of redressing the balance to Donegan were thwarted when Cook slid off the road in Turn Seven to ensure another full-course caution. With no time left for a restart, Kirkwood was duly declared the winner, with Frederick and Donegan rounding out the podium. 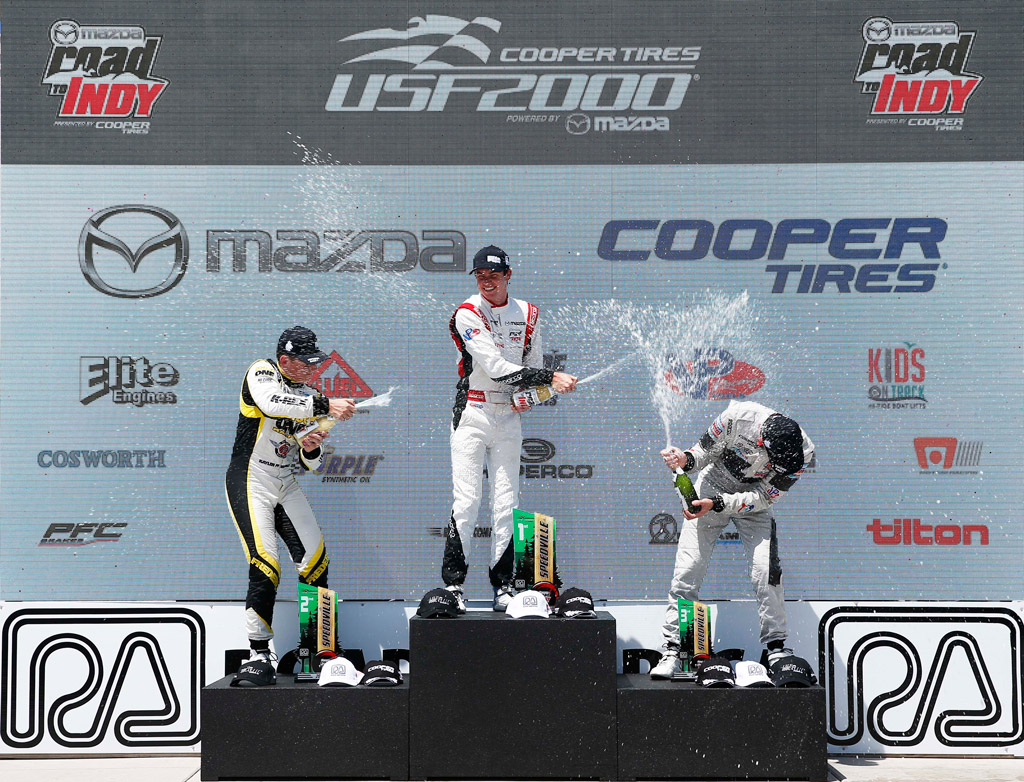 Kaylen Frederick (#24 Pilot ONE Racing-Pabst Racing Tatuus-Mazda USF-17): “The start was really hectic! I made up one position at the start and then studied lines to gain positions. I got my run on Rasmus late in the race but there wasn’t enough time to get to Kyle. Tomorrow will be a strong day for us, with Pabst Racing in the top three positions.”

The action was non-stop in this seventh round of the Cooper Tires USF2000 Championship Powered by Mazda, including three full course cautions and finishing with 12 DNF’s. At the start, Kirkwood passed Frederick on the draft into Turn One. Frederick returned the favor at Turn Five and passed Kirkwood around the outside. Incidents began to stack up after the start when two cars tangled in Turn One and then two more were eliminated in an incident even before the braking area for Turn Five. Cue the first of the full-course cautions… but not before Kohl already had jumped from third on the grid to the lead ahead of Pabst teammates Rasmus Lindh, who had started on pole, followed closely by Frederick In Car 24.

The restart, with three laps in the books, was relatively clean, despite some intense wheel-to-wheel action in Turn One. Kohl managed to cling onto his advantage over Lindh and Frederick, with championship leader Kirkwood lurking menacingly in fourth.

On Lap Five, Kirkwood moved up one position when he passed Frederick cleanly under braking for Turn Five. Soon afterward the caution flags were waving again after another incident, this time in Turn 12, which required removal of the stricken cars of Darren Keane (Newman Wachs Racing) and Kyle Dupell (Team Pelfrey).

The green flags flew again after a couple of laps behind the Mazda Pace Car, and once again the action at the front was intense. Kohl successfully fended off his pursuers to maintain the lead, while in his wake Frederick took full advantage of the draft to vault briefly from fourth to second passing Kirkwood and Lindh. It didn’t last for long. Lindh banged wheels with Frederick at Turn Three resulting in Kirkwood moving back to third and Frederick slipping back to 4th. Shortly thereafter, Lindh contacted Kirkwood’s front wing causing a puncture, after which Lindh found himself on the outside line at Turn Five and with nowhere to go but the escape road. Frederick then moved back into third trailing Kirkwood closely.

A major stack-up and some opportunist maneuvers saw yet another Pabst car, driven by Calvin Ming, who had started a lowly 15th after problems in qualifying, suddenly emerge in fifth, only to be unfortunately harpooned in Turn Six by Kory Enders (DEForce Racing), who had already lost his front wing following an incident during the previous caution period which resulted in the unfortunate retirement of Team Pelfrey’s Julian Van der Watt.

The latest carnage ensured yet another full-course caution, which left time for only a one-lap dash to the checkers. This time Kirkwood timed his restart to perfection, drafting past Kohl cleanly before Turn One to assume the lead for the first time and claim the win.

Frederick tucked behind Kirkwood with a deep braking line in Turn Five and hustled past Kohl. In pursuit of Kirkwood but unable to reel him in, Frederick secured his second P2 finish of the race weekend. The pair of podium finishes provided Frederick a solid boost in the Championship rising from 9th to 3rd in the standings. Pabst Racing also gained ground and is now tied on points for the lead of the Team Championship. 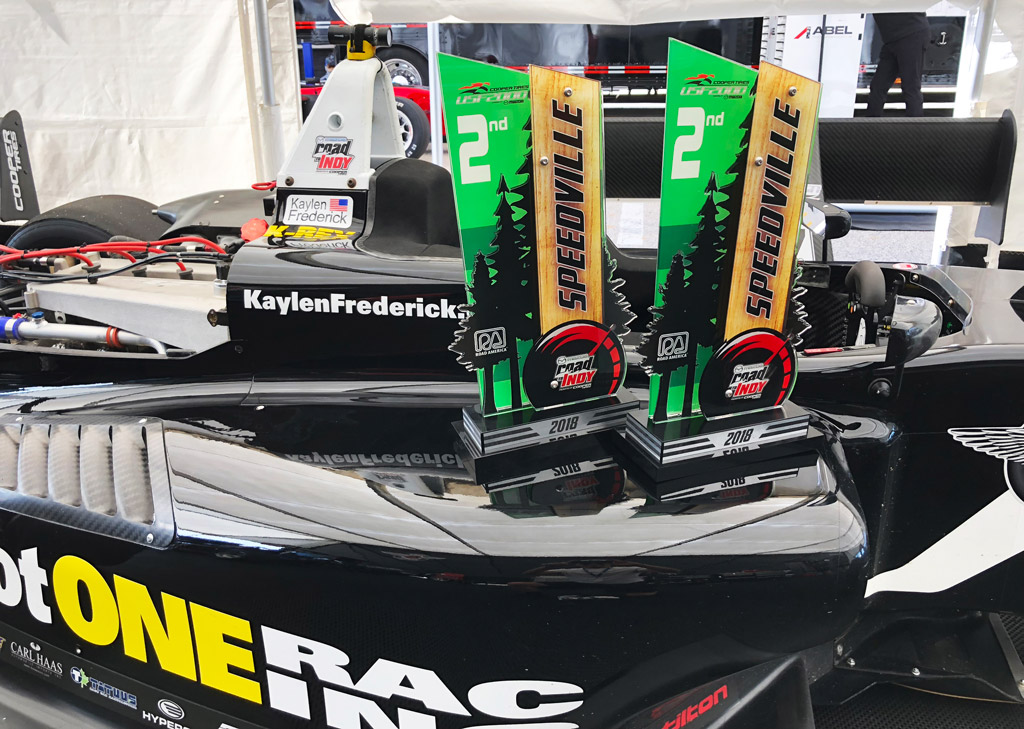 Kaylen Frederick (#24 Pilot ONE Racing-Pabst Racing Tatuus-Mazda USF-17): “It was a really hectic start. I tried to help my teammates build a bit of a gap to Kirkwood but that didn’t work out with the cautions. In the action I was at one point in the race pushed back to 4th! I was able to work my way through the lead group, but there was a lot of side-by-side and passing – a lot to think about out there. I’m happy to return to second from fourth. We would have liked to be on the top step for Augie Pabst, at his home race, but two spots on the podium in this race is also a good result for the team.”

Kaylen Frederick (#24 Pilot ONE Racing-Pabst Racing Tatuus-Mazda USF-17): “It was great to run up front and chase for the win. I have struggled this season due to unavoidable contact in three out of four races, through no fault of mine. Even though the Pabst Racing car No.24 and I have been quick, we do not have anything to show for it. In this race, I had a good start, worked my way forward and worked the restarts. The whole race was about looking where you could find clean air and make a move, and adjust to what drivers ahead of you were doing. Although I have experience on an oval from the Iowa Speedway race last season, the Lucas Oil Speedway is a different track. Here you are often moving on the outside and diving in for the pass, but passing on the inside isn’t that easy. I’m now looking to carry the momentum from this race into the championship and the Road America races in 3 weeks.”

Event Details:
https://www.usf2000.com/schedule/2018-championship/rounds-8-9
Up next, Kaylen and Pabst Racing’s USF2000 Series team will compete at the downtown Streets of Toronto circuit, July 13th – 15th. Follow Kaylen Frederick and Pilot ONE Racing on Instagram, Twitter and Facebook to stay up-to date on the latest news and developments.