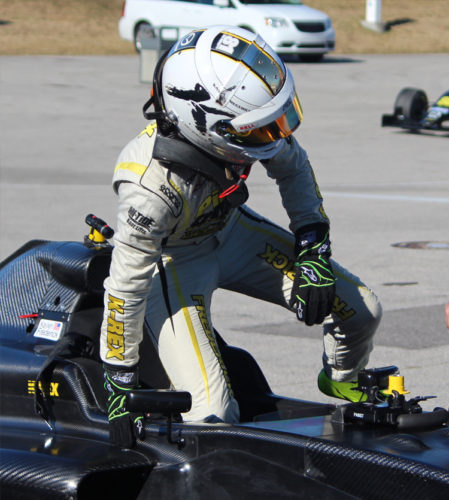 Oconomowoc, Wisconsin (January 30, 2018) – Pabst Racing is excited to announce the signing of Kaylen Frederick as the fourth Pabst Racing driver in the 2018 Cooper Tires USF2000 Championship Powered by Mazda. The Potomac, Maryland native Kaylen Frederick will pilot the #24 Pilot ONE Racing sponsored Pabst Racing entry in his second season in USF2000.

15-year-old Frederick began his racing career at the age of seven and charged onto the Mazda Road to Indy scene in 2017, earning five podiums and nine top-five finishes. In only his rookie season, he finished an impressive fourth overall as the youngest driver competing in the USF2000 Championship Powered by Mazda.

Although the official racing season has yet to start, Frederick has been honing skills and race craft preparing for 2018 in a wide variety of racecars and venues. Recently, Frederick earned three Formula Atlantic wins at Sebring International Raceway in the HSR Series and followed this up with four poles and two more wins at Homestead-Miami Speedway and Sebring in the SCCA Majors and Hoosier SCCA Super-Tour.

“After testing in the off-season in BRDC F3, Pro-Mazda, Formula Atlantic, and USF2000, working with Pilot ONE Racing we’ve decided to focus on the USF2000 campaign in 2018,” said Frederick. “Pabst Racing will provide the ideal team, car, and race preparation to enable me to win the USF2000 Championship. After testing with Pabst and winning races with Tonis Kasemets in Formula Atlantic, I’ve found a team, lead engineer, and environment that let my driving skills and focus excel.”

As the pre-season testing quickly approaches, Pabst Racing owner Augie Pabst was thrilled with the addition of Frederick as the fourth driver to an already competitive lineup.

“We had our eye on Kaylen throughout the 2017 season, knowing he would be a great addition to our team in 2018,” said Augie Pabst. “Now that he is a Pabst driver, I’m certain we have signed the best four USF2000 drivers in the series. As our driver lineup is now set, we will be focused on the final preparations for the 2018 season.”

Having had the opportunity to not only test with the Pabst Racing team but also work with engineer Tonis Kasemets in his off-season Formula Atlantic races has given the team and young driver the opportunity to develop solid momentum heading into the exciting 2018 USF2000 race calendar.

“My goals for 2018 are to race at the highest levels and against the toughest fields available,” Frederick said. “With the wide variety of road courses, street courses, and speedways, the USF2000 Series and the Mazda Road to Indy is the place for me to be in 2018. As a 2nd year driver in USF2000, my focus is on winning races and leading the championship.”

The team will be heading south in just a few short weeks where they will begin the 2018 season with a series test at Homestead-Miami Speedway on February 24th and 25th, before heading into the season opening race at St. Petersburg, Florida on March 9th through 11th.

Visit www.USF2000.com for more details about the series or upcoming events.

Pabst Racing has been preparing winning racecars since 1983. The Pabst team was started by Augie Pabst Jr., former sports car racing legend from the 1950s and early 1960s who won many races and championships throughout his career. Current President Augie Pabst III (former driver as well), took over the business in 1991. By 1998 Augie III decided to focus on owning and maintaining a wide variety of winning racecars including SCCA Spec Racer, Shelby Can-Am, 911 Porsche, Ford Mustang GT-1 and primarily Van Diemen Formula 2000 cars. For more information please visit www.PabstRacing.com.

The Cooper Tires USF2000 Championship Powered by Mazda debuted in 2010 and is a revival of the highly-regarded USF2000 series which ran from 1990 through 2006, launching the careers of many of today’s top drivers. Sanctioned by INDYCAR and managed by Andersen Promotions, the series is the first official step on the Mazda Road to Indy ladder system. The top driver in the Championship class will earn a scholarship package from Mazda to advance to the Pro Mazda Championship. For more information, please visit www.USF2000.com.

About Pilot ONE Racing

Pilot ONE Racing supports and assists young race drivers in developing professional driving careers, seeking funding, and reaching the highest level of motorsports. Pilot ONE drivers train at the highest levels in the use and operation of race vehicles, from karts to open-wheel and endurance racecars. Driver development includes physical training, pre-season testing programs, race season mentoring, supporting coaches and engineers, in both the USA and Europe. For more information visit ‘Contact Info and Partnerships’ at:
www.K-RexRacing.com.