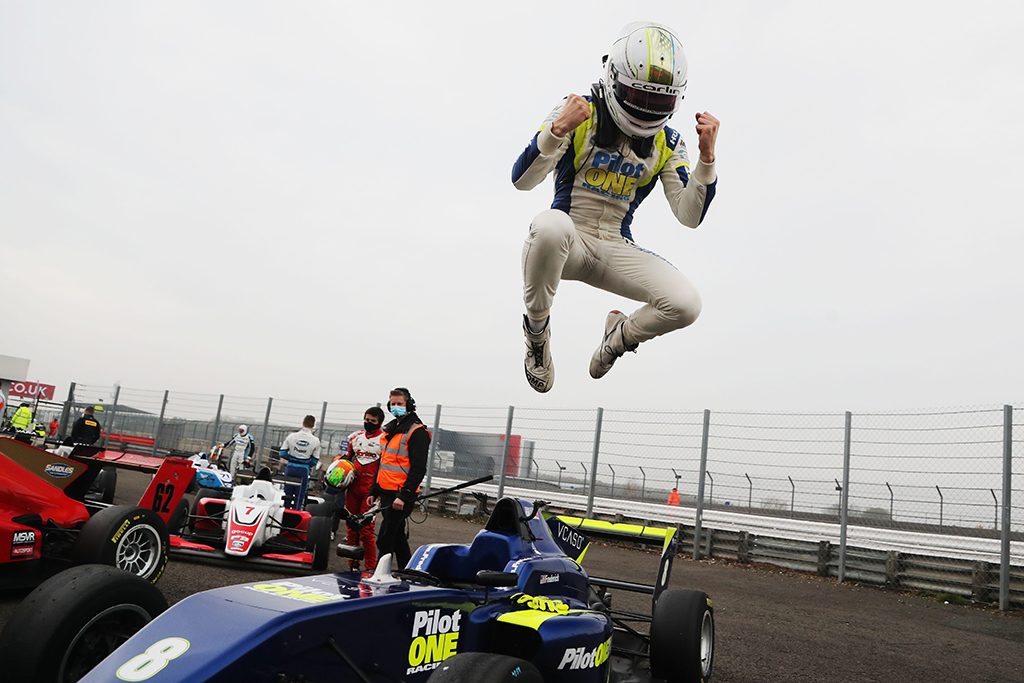 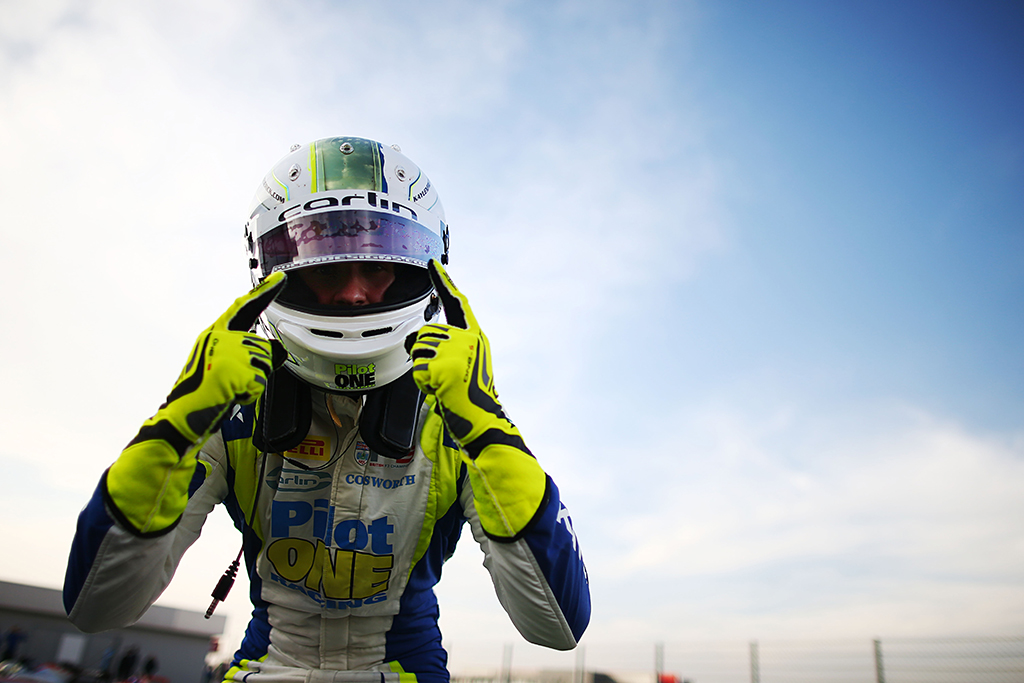 “Carlin’s championship leader Kaylen Frederick will start races one and three from pole on the Silverstone Grand Prix circuit, after securing a double pole in qualifying this morning (Saturday), and breaking the Silverstone qualifying lap record in the process.
The American’s sixth and seventh poles from qualifying means he has secured the £1,000 end of year prize for the Jack Cavill Pole Position Cup, with his best time of 1m54.354s being 1.5 seconds quicker than the previous qualifying record.

A gripping title fight looks in prospect though, as HiTech GP’s Kush Maini, just 13 points behind Frederick in the championship will start alongside him on the front row for both races.

Frederick’s late efforts put him just 0.041s ahead of the Indian on the grid for Race one, and 0.050s clear on the Race three grid. Maini had languished down in 14th place with five minutes remaining, but a series of late flying laps elevated him up the order.” 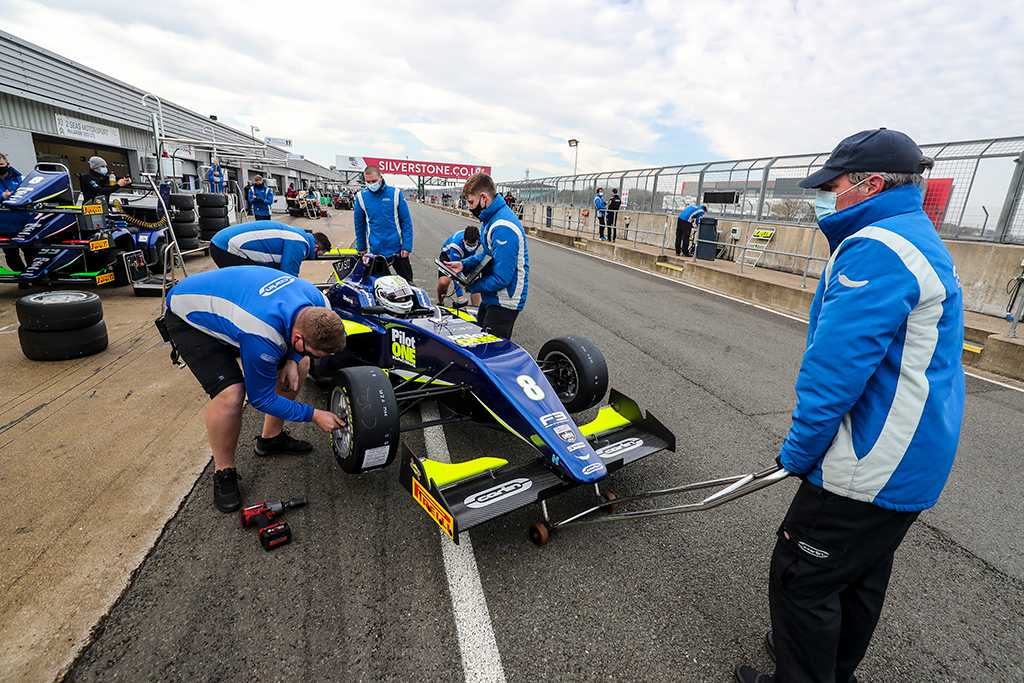 What they said: Silverstone Circuit Qualifying

“We’ve been looking really strong so far in practice, so I’m glad we could put in two solid laps for qualifying. I would have been happy with either place on the front row, but we helped ourselves out massively with a double pole.

Pole positions really matter in this championship, as it is hard to overtake. We’ve done an amazing job recovering from Brands Hatch to get this many pole positions and then get so many wins to catch back up and now pull ahead in the Championship. I am happy to take the reward, which comes with the poles.

I am sure he (Maini) will be pressuring me. I have to make sure I am doing the best I can, not making any wrong moves. I’ll be staying composed and I’ll be taking all the pressure he can throw at me.” 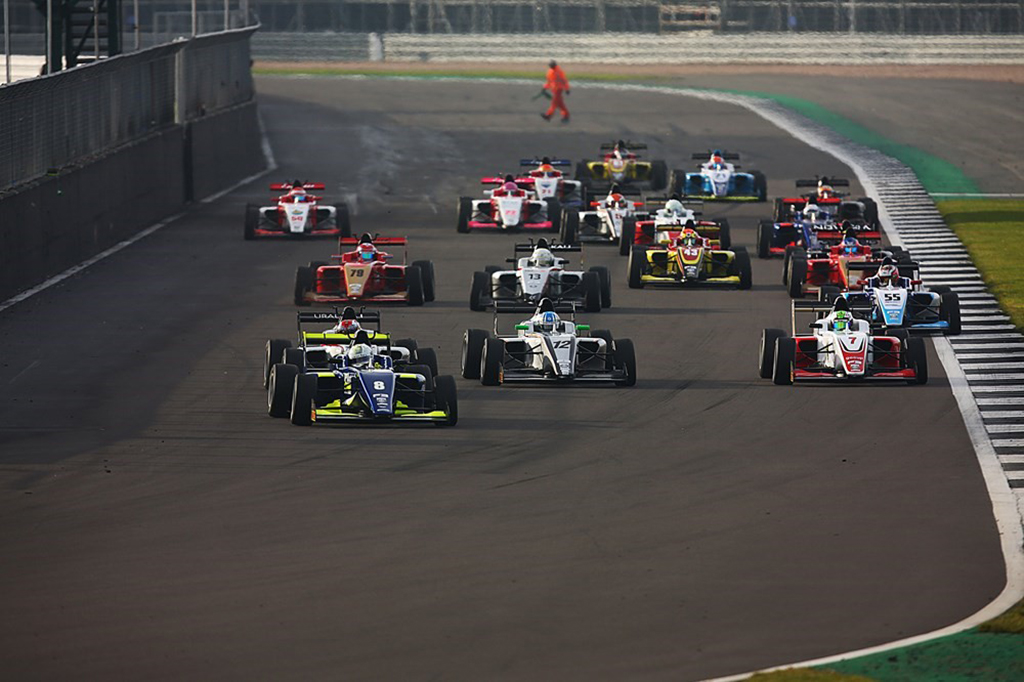 Frederick built a lead of seven tenths of a second over Simmons at the end of lap one, a margin he had extended to six seconds at the end of lap 6. That lead was wiped out through when De Pauw and Ushijima came together at The Loop on the same lap six, dropping Ushijima down to sixth but wiping De Pauw out of the race and also championship contention, with the Belgian’s car stranded just off the racing line with a buckled rear suspension.

The safety car was deployed with De Pauw’s car requiring a lift away from the scene. Quick work from the marshals allowed the contest to resume at the end of Lap Eight, with Frederick immediately pulling away to establish a gap of over 1.5 seconds at the end of Lap Nine, and taking the flag by 2.6 seconds as he extended his championship lead to 24 points with two races remaining.

Maini now faces an uphill battle tomorrow to steal the championship from Frederick. The Indian driver can score a maximum of 70 points across tomorrow’s two races, while Frederick can earn 72, as he starts two places further back on the race two reverse grid. Frederick simply needs to outscore Maini by 11 points in Race Two tomorrow morning to claim the championship title one race early.”

What they said: Silverstone Circuit Race 1:

“The race went fairly well. I did not have the best start but I defended well and then put in some quick times afterwards. I do not know how big the gap was before the safety car but we had a solid margin. I was trying to take care of the tyres and make sure they were there at the end so we could keep putting in the quick times. I then got a good safety car restart and just put in one quick lap at the end and that was pretty much it. I am pleased.

The safety car added a bit more stress but we have talked and done all our prep for safety car restarts so I rather knew what I needed to do. The restart wasn’t a big problem, but it made it a bit more interesting.” 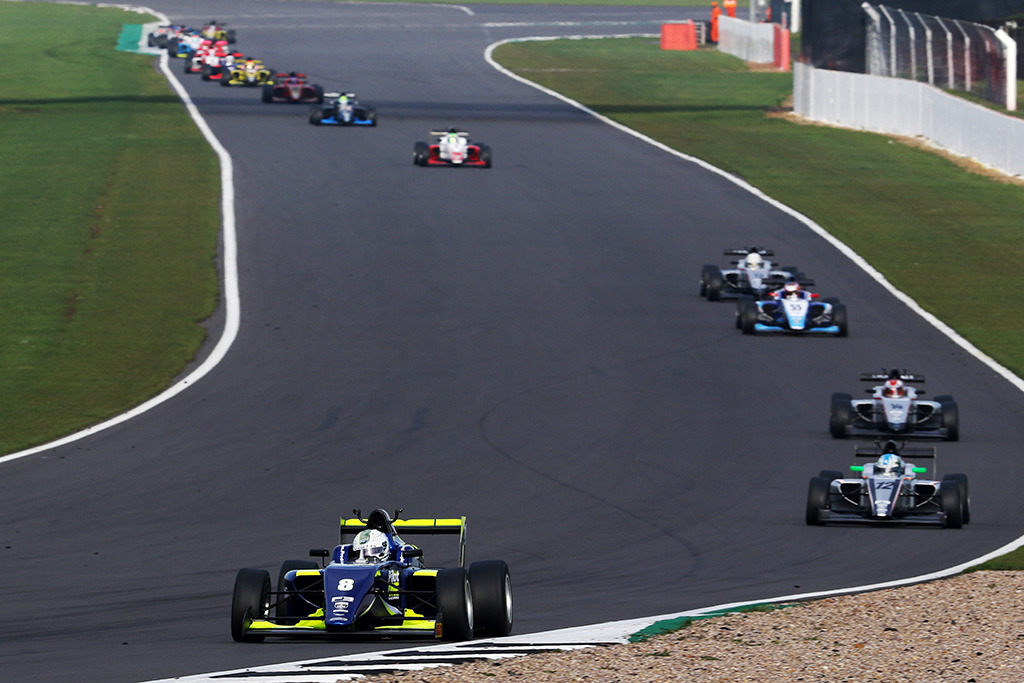 “…there was all sorts of drama, mainly between championship contenders Kaylen Frederick and Kush Maini, with the pair banging wheels on a couple of occasions on the same lap. The pair raced with wet weather tyres on a cold and damp but drying track, with half the field opting for slick tyres in the assembly area just before the start of the race. The slick tyre gamble paid off with the podium drivers all racing with dry tyres, while Frederick and Maini slipped down the order after strong starts.

Frederick ultimately finished 12th with Maini 17th, a result which sees the pair separated by 33 points going into the final race with 35 points still on offer.

Pole sitter Marzorati Marzorati fell to 11th for Chris Dittman Racing, but still a long way clear of Frederick, who just missed out on claiming the title a round early, but now only needs to finish the race to claim the title.” 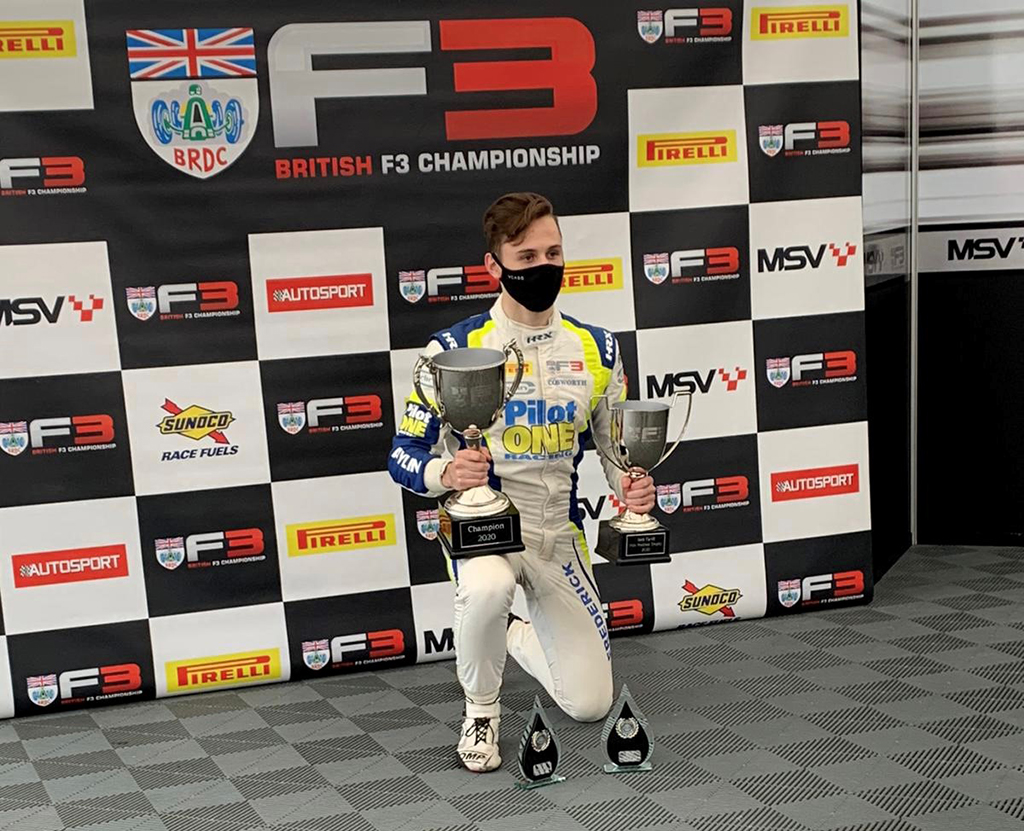 “Carlin’s Kaylen Frederick led from lights to flag to claim his 9th win of the year in the final race of the weekend at Silverstone, and secured the BRDC British F3 Championship title in the process. Frederick entered the race needing only to finish to wrap up the title, but did it in style with another victory.

Frederick becomes the first American driver to win the British F3 title, and he finished over four seconds clear of Fortec Motorsports’ Roberto Faria who secured his first ever podium with second place ahead of JHR Developments’ Ayrton Simmons. Kush Maini needed to win the race with Kaylen failing to finish, but the Indian could only manage sixth place after being overtaken late on by Hillspeed duo Oliver Clarke and Sasakorn Chaimongkol, who finished fourth and fifth, with Maini settling for sixth.”

As has been the case for most of the season, a good start from pole position meant that Frederick led the field almost untroubled around the opening lap. Faria and Simmons found their way past Maini, who dropped from second to fourth by the end of the opening tour.

Frederick then pulled away, again as he’s done so often in 2020, enjoying a lead of over three seconds by the mid race point, a gap he extended to 4.121 seconds at the flag as he clinched his 9th victory from 24 races, and secured a clear title success. The American finished over 50 points clear in the championship standings.” 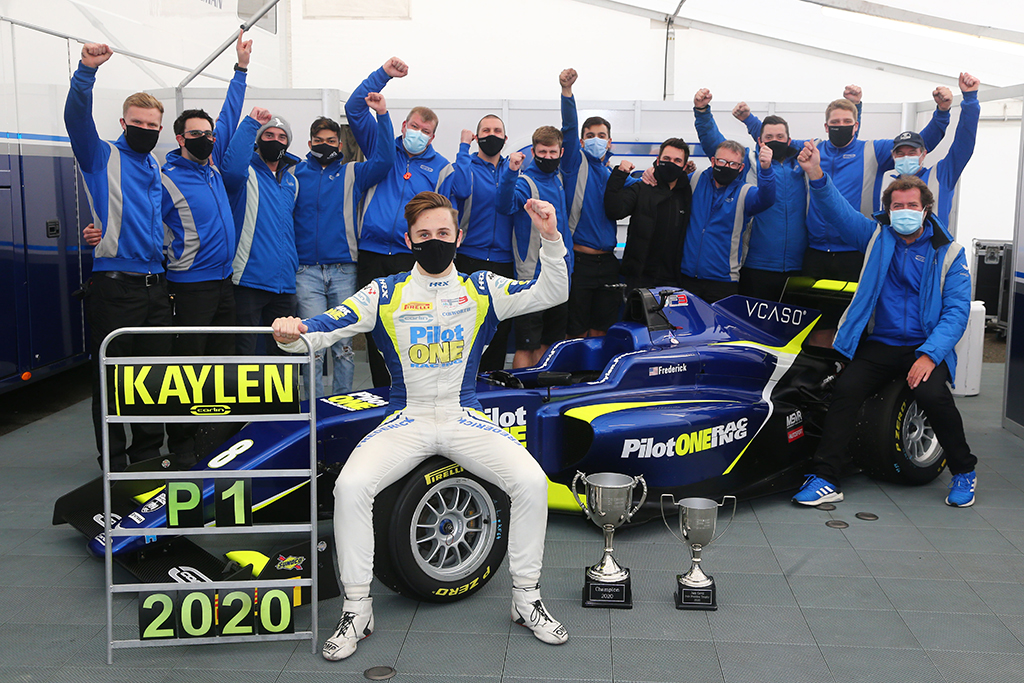 What they said: Silverstone Race 3:

“It feels absolutely amazing. I think it will only settle in tomorrow morning when I wake up. I am still fresh from the race at the moment! We did not put a foot wrong, we had a great start and had amazing pace. I am just so happy to wrap up the championship. We have had a few ups and downs but we kept at it and we put in the work we needed to catch up and then pull ahead with a really solid gap at the end in terms of points. I am just so grateful; so many people have put in so much effort for this year and made so many sacrifices. I am just grateful I could bring it home for them.

It seems to be the case [big wins]. We have been unstoppable once we’ve positioned ourselves in the lead. There really was not too much to this race besides managing tyres a little bit. It was an enjoyable last cruise in this car!” 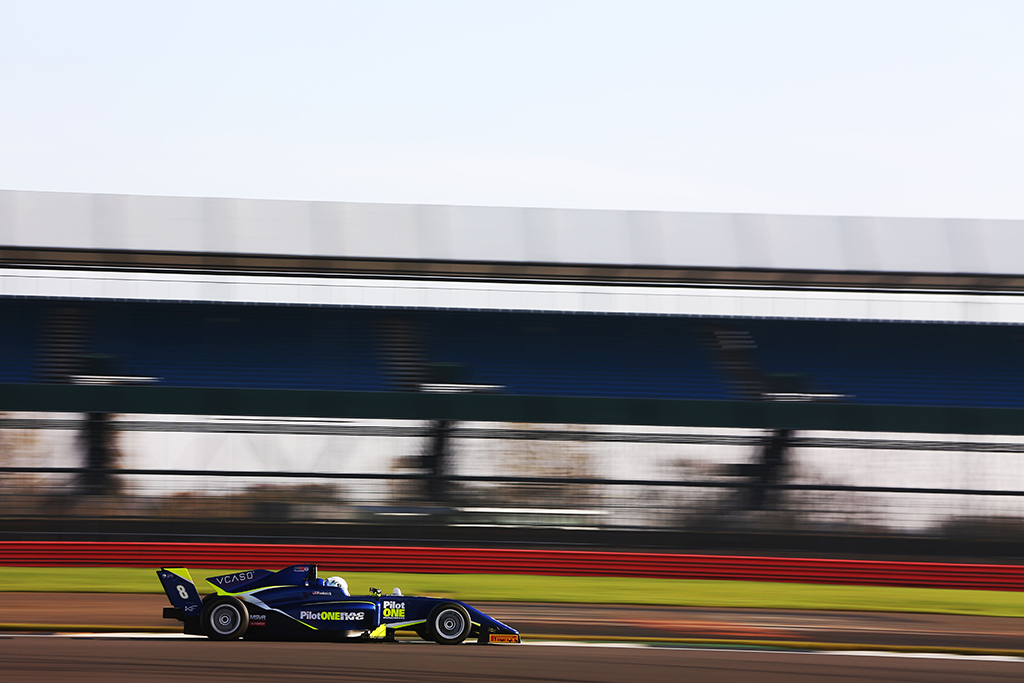 Thoughts of a Champion: Kaylen Frederick

Carlin’s Kaylen Frederick secured the 2020 BRDC British F3 title at Silverstone, taking two wins from the three races, and finally wrapping it up with a lights to flag win in the final race of the year.

After the dust had settled on the campaign, Frederick shared his thoughts with us.

Kaylen, you’re the 2020 BRDC British F3 champion, it’s an hour after the race, has it sunk in yet?
“It has a little bit more! Just thinking about plans going into the future, it just makes things a lot easier getting into other teams or even just my self confidence going into the bigger series. It will help me out just that little bit. I’m just so thankful that we could pull it off, everyone has been working so unbelievably hard for it and I think I’ll wake up in the morning with a better outlook on all the efforts that everyone’s put in today and across the rest of the season. I’m just so thankful.”

It’s been one of the most dominant British F3 title campaigns we’ve seen. There’s been a few ups and downs but the nine wins speak for themselves don’t they?
“We struggled quite a bit after Brands and it wasn’t looking amazing. After that we were just on the up, we got a win at every race weekend and qualified on the front row every weekend. We put in the work we had to and we made up that point deficit, and then extended our lead even more. It’s really showed the potential that we had, but we perhaps made it a bit harder for ourselves than we needed to!”

After Brands Hatch, you lost the championship lead that you had built up nicely in the first few rounds. Did you feel like you’d lost it or were you confident that you could get to where you are now?
“It wasn’t looking great to be honest! But I didn’t think it was lost because it was only the third race weekend of the year. But we knew what potential we had so if we put everything together then I think we would have been in a great spot and I think that’s what we did. We all pushed super hard for the last few races even though some people were in tricky situations and had some issues in their lives, they all were there to support us and help us improve. So again, I’m really thankful. Everyone couldn’t make it for these last few weekends because it’s been something really special.”

What’s your secret been, because some of the wins you’ve had have been so dominant. You’ve just pulled away by seven, eight or nine seconds, which is something we don’t see very often.
“It all just comes down to the preparation. We’ve been so efficient in testing to get where we are and get the car where it needs to be at every track. We just put together everything we could and threw everything we had. It really just showed that we had the best car combination this year and we were pretty much unstoppable towards the end with double poles and double wins in the last two race weekends.”

Now that you’ve got the championship in the bag and proven your pace, what are you looking to do next?
“It’ll probably still be another form of F3, whether that’s FIA F3 or EuroFormula, we’ll see. We’ll see what series suits us better but this championship will help us out going into whatever we want to do next year.”

Next on the Calendar:
Testing for 2021 – Series to be determined!
Please watch these pages as we post updates! 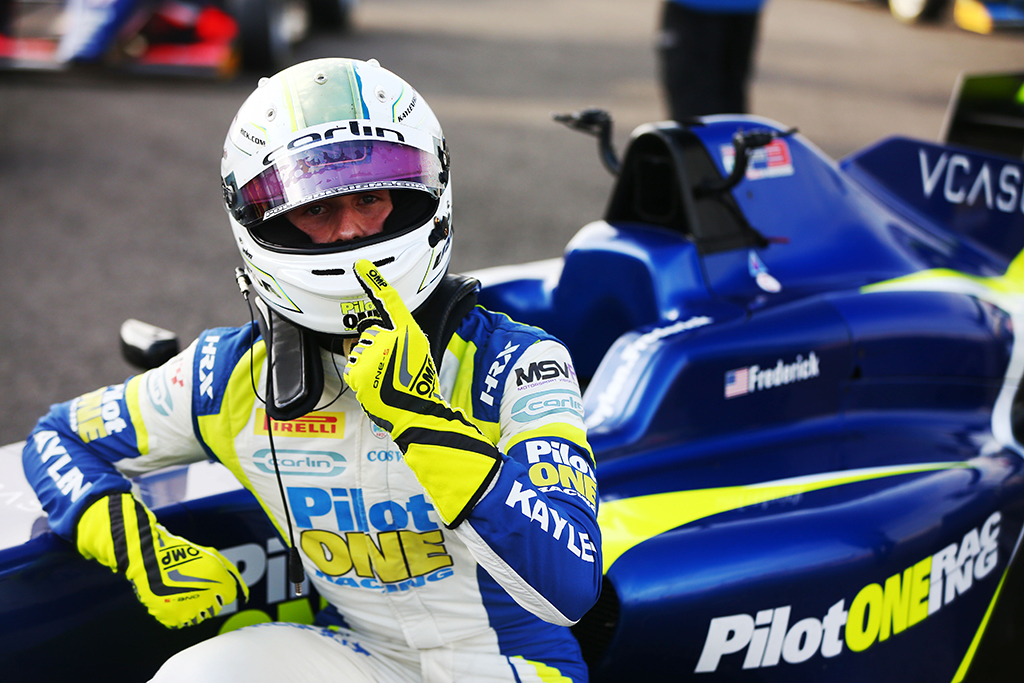