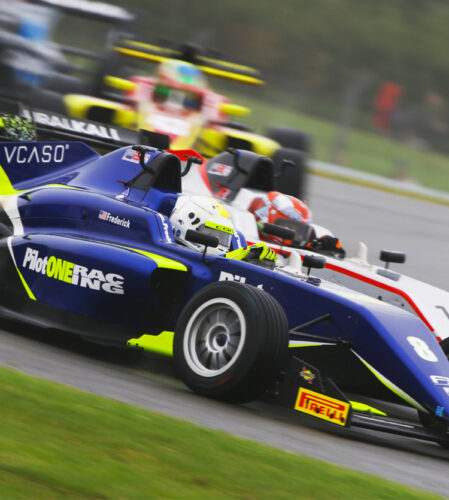 Frederick Takes Third Win of the Year in Donington Thriller

“Carlin’s Kaylen Frederick claimed his third win of the season in an enthralling third race of the weekend at Donington Park, with a gap of 11.112 seconds to Chris Dittman Racings Josh Skelton in second.” Once clear of Josh Skelton “Kaylen pulled away at lighting speed, lapping over a second quicker than anyone else to eventually take the flag by 11.112 seconds, the second biggest winning margin in BRDC British F3 since 2016.” 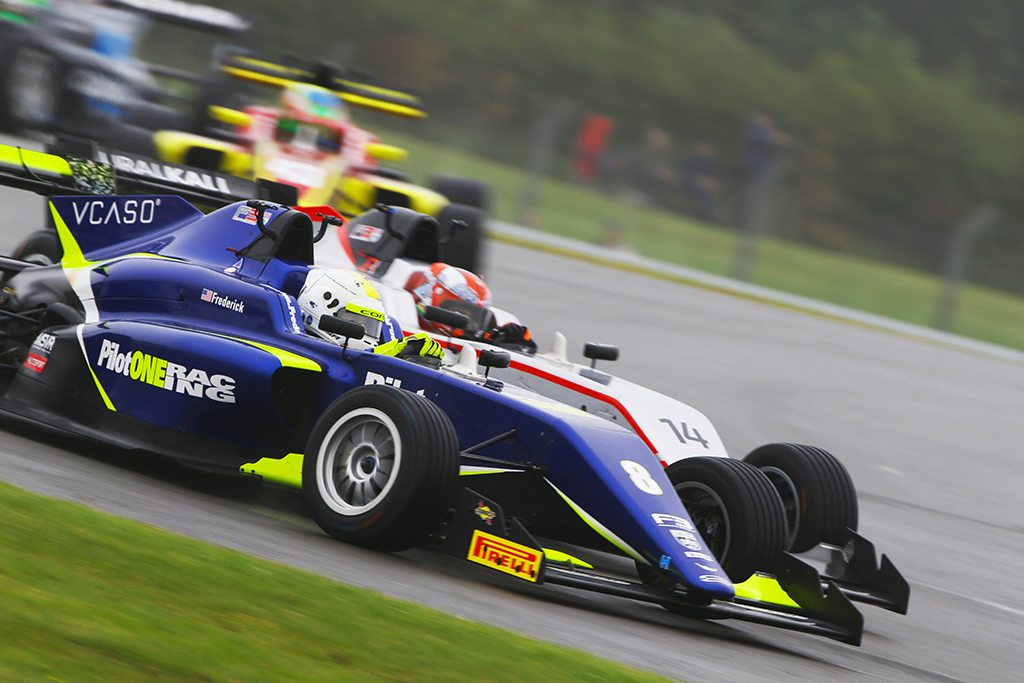 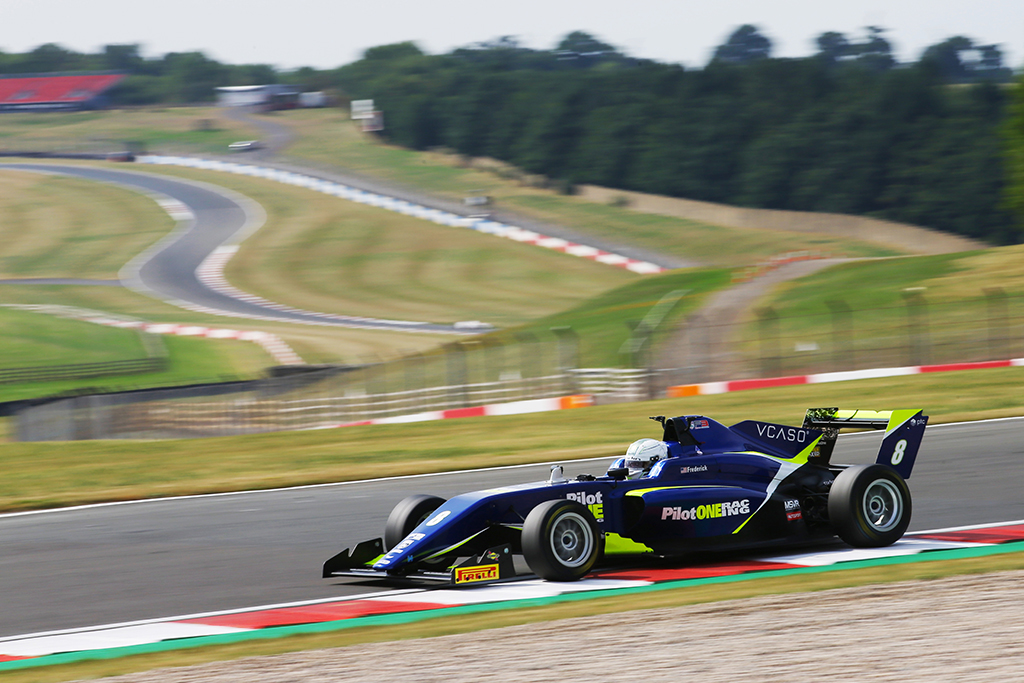 What they said | Oulton Park Qualifying:

“We weren’t looking extremely strong in practice, we had some good sessions yesterday but we put it all together today for one quick lap. It was a bit unfortunate that I couldn’t get a second quicker lap in because I went off at the chicane and ruined my second best lap so I start P3 I believe for race three, but I’m happy with the pole position nevertheless.

“That [to make it three wins in a row after the Oulton Park double] would be the goal, the plan is to get a good start again and then keep focusing forward. We will see how the start goes but I’m quite confident with my starting ability and I’ll get off the line quite well hopefully and focus forward like I did at Oulton Park.” 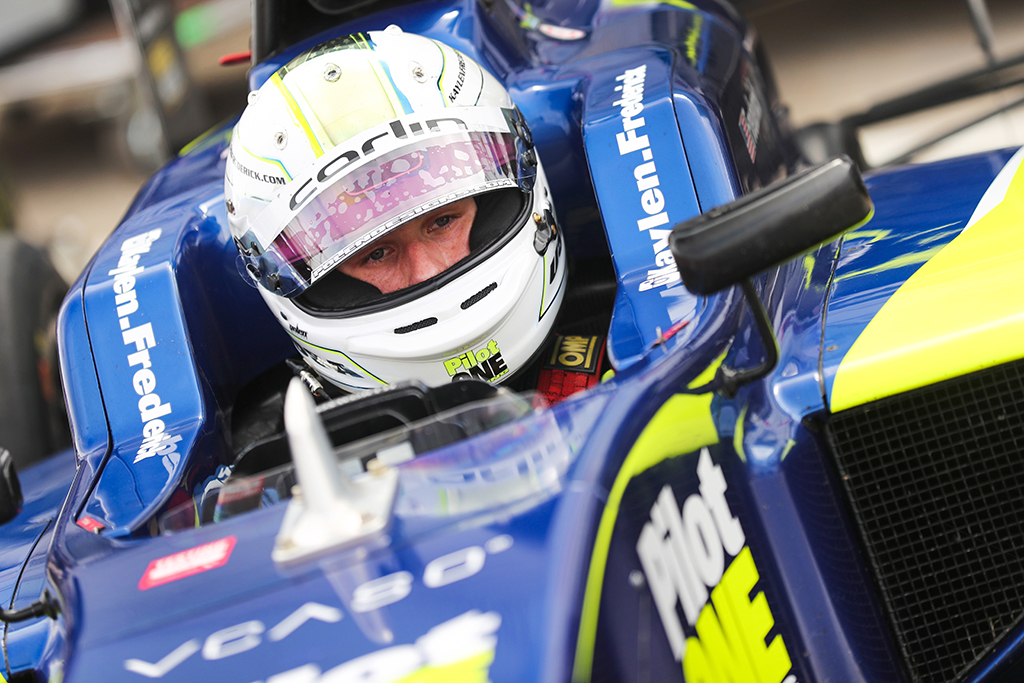 With two victories to his name from the opening round at Oulton Park, Frederick carried on his impressive form by taking pole for the opening contest at Donington, and for half the opening lap it looked like being another masterclass from the Carlin-run American. But, exiting the Fogarty Esses, he ran wide across the grass and dropped behind fellow front-row starter Foster (Double R Racing) and Hitech GP duo Reece Ushijima and Kush Maini.

On the following lap, Nico Varrone found more than just grass on the exit of the Esses and the safety car was called to retrieve the stricken Chris Dittmann Racing entry.

While the front trio maintained station at the restart, championship leader Frederick began to lose positions due to a failing actuator, which meant changing up and down gears was becoming more difficult and unpredictable. He fell to sixth when he ran wide at the Melbourne Hairpin, dropped to seventh on the following tour due to the same error, and by the penultimate lap he was eighth.

On the final lap, Frederick was sent into the barriers at Coppice as he suffered a throttle blip when downshifting. Crucially, however, the race had run for a lap longer than scheduled, meaning the final result was taken from the lap before. Not only did it mean he kept 13 valuable points for an eighth-place finish, but he would start 11th instead of 18th for the full reversed-grid-second race. 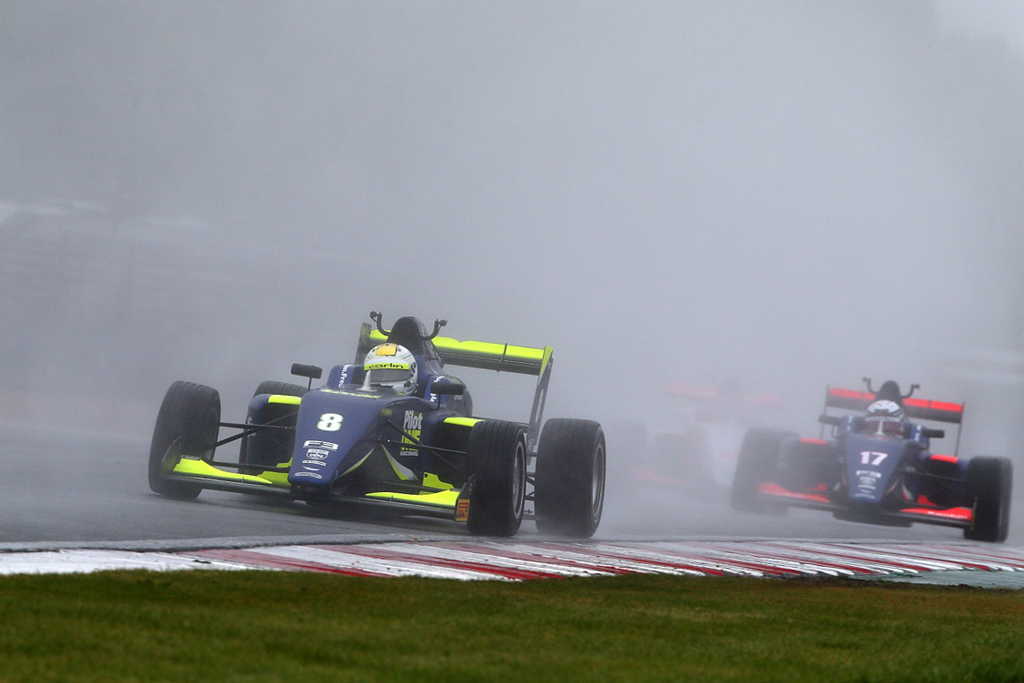 “…Behind them (front runners), Frederick’s charge was just beginning. From 11th, he was already up to sixth, and moved into fifth on lap five with a move on Pedersen. He was third by lap six, as the American and Horsten moved past Williams, but any chance of a win for the Carlin driver seemed to be fading with Clarke eight tenths up the road and De Pauw a further 9.3 seconds in the lead.

But Frederick moved past Clarke on lap seven, and in doing so closed the gap to the Belgian driver to under nine seconds. The championship leader then began to make big inroads, lapping around 1.6 seconds quicker on lap eight to reduce the gap to 7.3 seconds, and another 1.3 seconds quicker the next time around, with the margin now just over six seconds.

De Pauw was still setting personal best laps, but Frederick continued to reduce the gap rapidly, bringing it down to 4.9 seconds with two laps remaining, and 3.5 seconds as they started the final tour. But De Pauw’s early work was more than enough to secure a maiden victory by 2.1 seconds, while Frederick did his championship challenge no harm at all by gaining nine places and taking the points for second place.”

What they said | Donington Race 2:

Second – Kaylen Frederick, Carlin:
“The first couple of laps were just all about survival to be honest, but once the race settled in I could just pick people off one by one. The car was great, it just shows how much progress we have made in wet testing, so I’m thankful to the team for giving me such an amazing car. I’m happy, we had a great result today after a disappointing end to yesterday, after we had some car issues, with the actuator which was failing so I couldn’t upshift or downshift throughout the lap. I still finished with a decent position from Race 1 but I’m a bit disappointed we didn’t get the target result yesterday. Second place in a reverse grid with 10 positions gained is quite good, I’m quite pleased with it and it’s a good recovery.”

“On the in-lap to be honest, I was right on him [De Pauw], so I don’t know if he was letting off a little bit, but with one or two more laps it would have been promising for a win. I can’t complain much because it was such a good recovery from yesterday, so I’ll take it.” 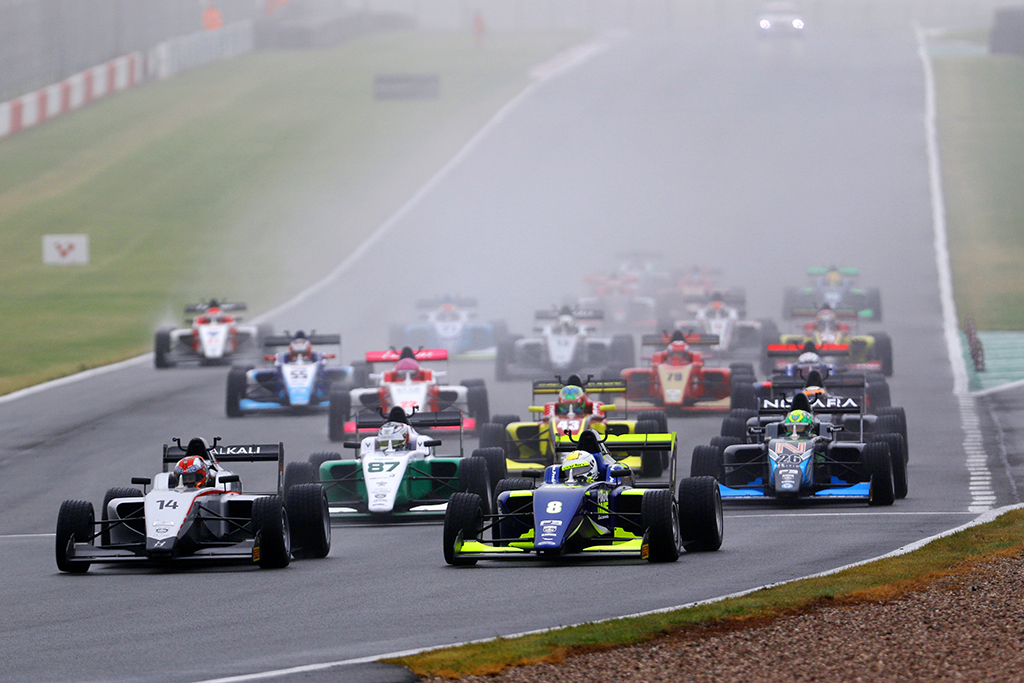 “Frederick’s performance in the wet (in race 2) was an ominous sign for race three, where he would start third, behind Maini and Foster. After getting the jump on Foster off the line in drier but still damp conditions, Frederick showed why he is the driver to beat this year with a superb pass around the outside of Maini at Goddards on lap four.”
https://www.autosport.com/national/news/151525/new-british-gt-winners-as-rain-affects-national-racing

“Carlin’s Kaylen Frederick claimed his third win of the season in an enthralling third race of the weekend at Donington Park, with a gap of 11.112 seconds to Chris Dittman Racings Josh Skelton in second.”

At the start, pole man Maini held off the advances of Frederick, who made a blinding start to pass front row man Foster, who slipped back to fifth behind Jewiss and Skelton, with both enjoying fast starts. Maini held a lead of eight tenths of a second at the end of lap one, but that was as big as it got for the Indian driver, with Frederick halving the margin next time around, and then taking the lead around the outside of Goddards on lap four.

Once clear of Maini “Kaylen pulled away at lighting speed, lapping over a second quicker than anyone else to eventually take the flag by 11.112 seconds, the second biggest winning margin in BRDC British F3 since 2016.“ 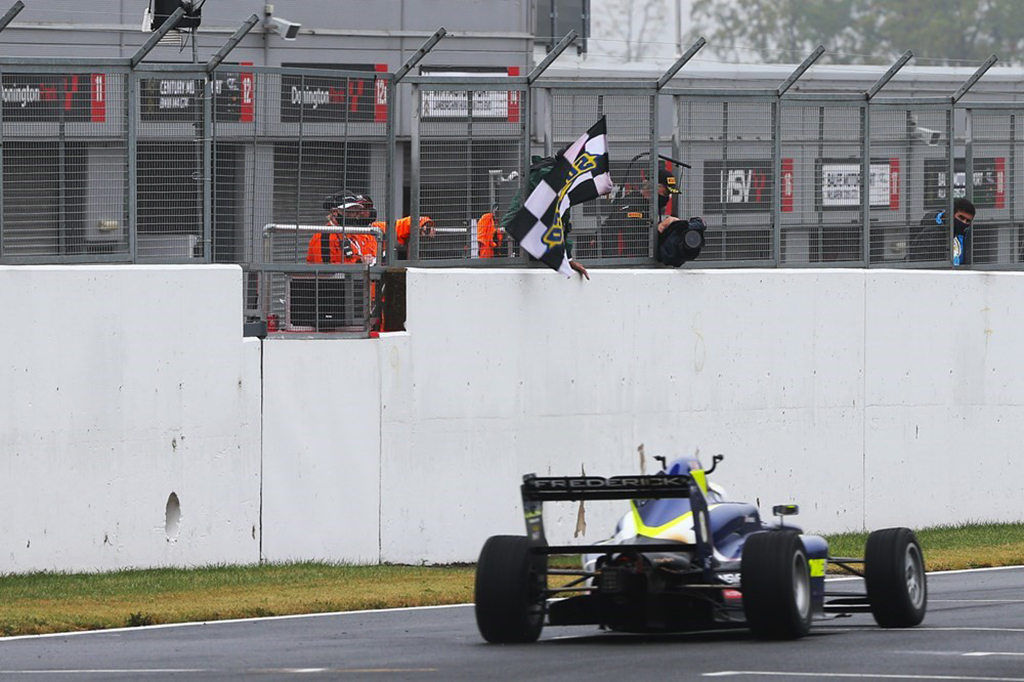 British F3: What they Said: Donington Park | Race 3t Lap of the Weekend

Winner – Kaylen Frederick, Carlin:
“I honestly didn’t really expect this, I was just going to settle in for a podium position, but I got a really good start, almost got the lead at off the start, but he [Maini] kept hold of it for a couple of laps. He told me he had a couple of issues, so he was struggling in front of me and we just had a bit too much pace for him I guess. Once I got ahead it was just clean air for myself, I focused on putting in a quick lap and it seemed like they were struggling behind. I’m really happy with the performance of the team today, we had a great recovery earlier and now a win, it’s just awesome, the best way to end a weekend.

Question: “Kaylen – would you describe for us please the overtake of Maini for the race lead?”
“It [overtaking Maini] was quite close. The only real place you can get by here is the outside where there is more grip so you have to force them onto a tighter line and try and get around the outside, which is just what I did. I tried it the corner before, it didn’t work out, but it set him up for the last one and it seemed to just hold.

“Honestly after yesterday’s race I was really a bit gutted, and the way we have bounced back today is awesome, so I’m really chuffed. I don’t know where I stand in the championship, but I think we’ve salvaged quite a few points this weekend considering we had a really bad race yesterday.” 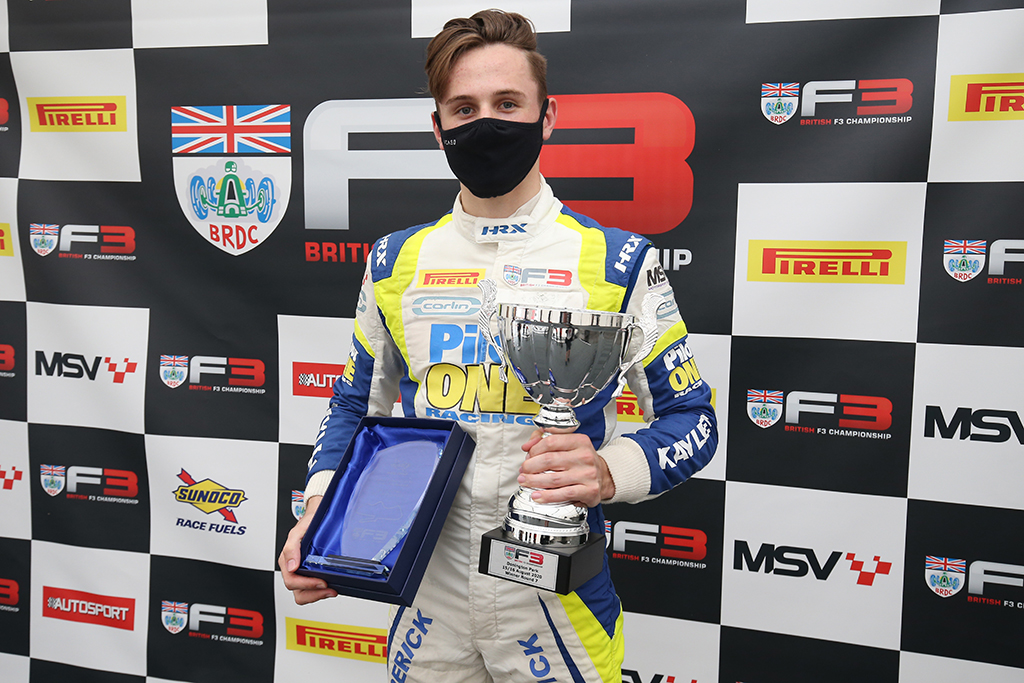 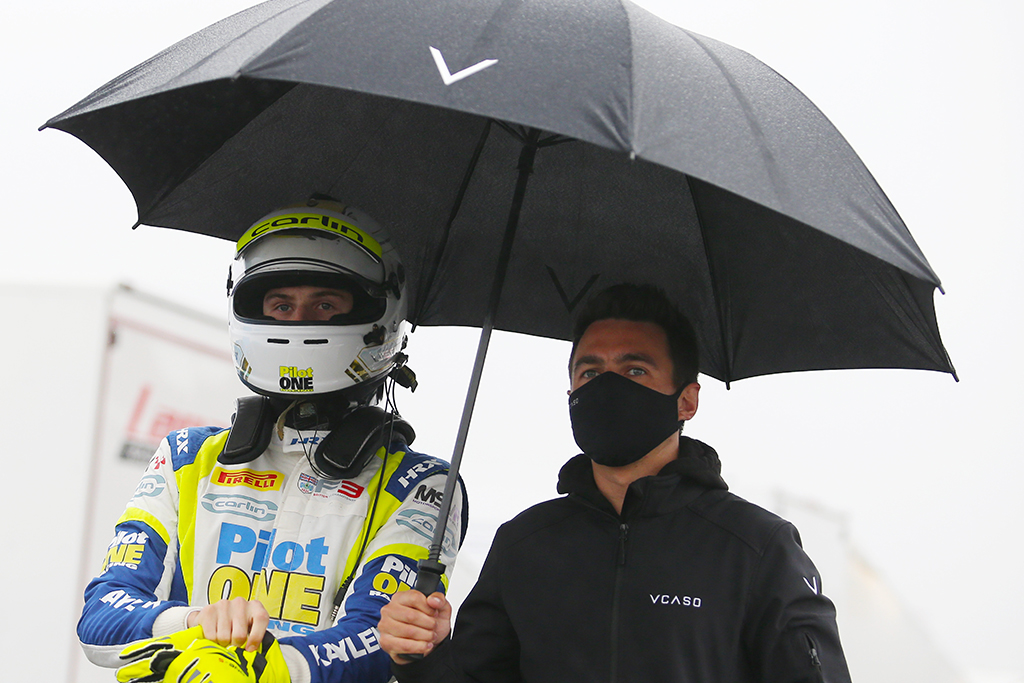 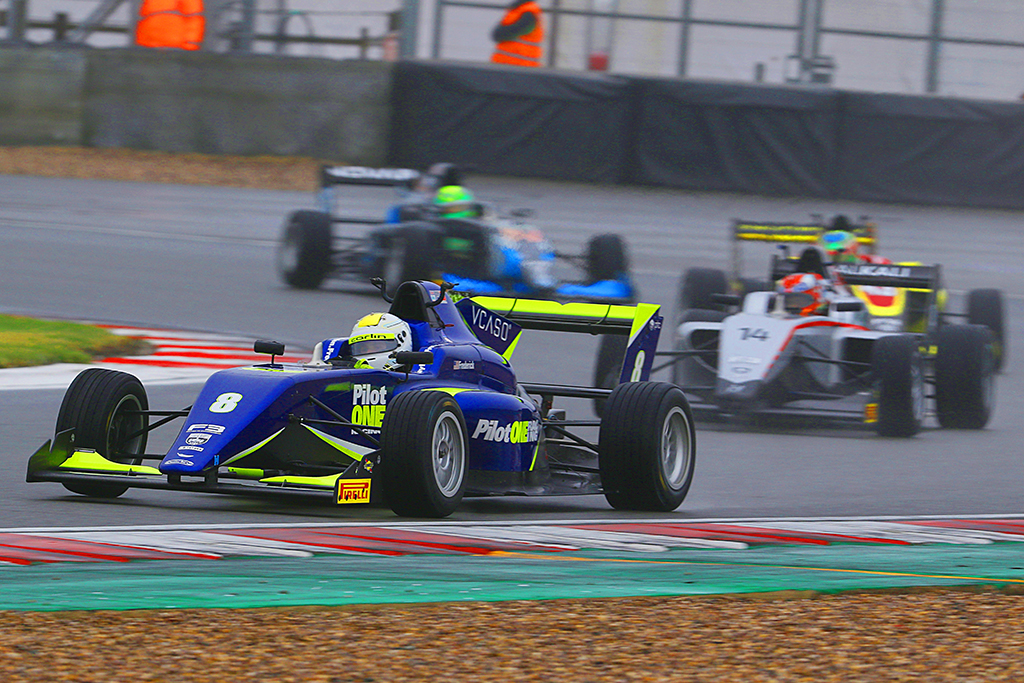